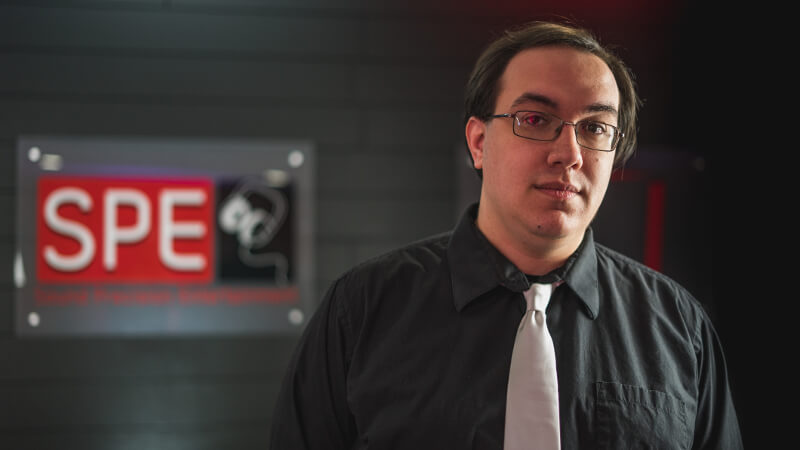 Ian Kroyer is Sound Precision Entertainment’s jack of all trades. This multifaceted employee joined SPE almost a year ago and already works on a variety of projects in the company.

Kroyer is SPE’s Monocle Photo Booth guru, making sure this top-notch service meets our clients’ needs at weddings and other events.

“SPE’s photo booth stands out from other booths I’ve seen due to its open-air method,” he said. “The biggest plus is the test photos I take to make sure everything runs smoothly. I give them to my mother, who has quite the collection of them now!”

With a wide variety of weddings now under his belt, Kroyer has some advice for couples who use Monocle.

“Make sure everyone takes a photo, even if it’s a simple one,” he said. “A signature in a guest book is nice, but a picture is worth a thousand words.”

However, Kroyer’s involvement with SPE doesn’t end here. When he’s not manning the photo booth or producing videos, Kroyer also works as a DJ with SPE.

“I’d have to say my favorite part of this job is all the locations I get to visit,” he said. “You normally don’t get to see these venues unless you’ve been invited to some kind of big event, like a wedding. Because I’ve worked for SPE for less than a year, I haven’t seen a lot of places on repeat yet, so every location has been a whole new experience each time!”

While still new to the industry, Kroyer has some advice for couples to make their marriage last.

“Balance each other,” he said. “My parents have been together for 27 years and still bring out the best in one another. Don’t deny your faults; the whole point of a marriage is finding your other half, i.e., the parts of you that you don’t have but need.”

With all his work with SPE, Kroyer still finds time to relax when he can.

“Recently I’ve taken up cooking,” he said. “I make simple dishes for now, but I am working on more complicated recipes, as well as experimenting with what I already know. So far, I’ve enjoyed making sauces for pasta. There’s a number of different types of sauce, and you can experiment with what to add to change the base up.”

How do you pump up a crowd?

Line dances are my go-to to get the crowd moving.

What do you like to do in your free time?

I play video games. My favorite video game is the “Legend of Zelda: Majora’s Mask.” This game laid the groundwork for my expectations in terms of storytelling, music and philosophy in gaming.

Who or what inspires you?

My family inspires me, each for different reasons, but mostly for the simple fact that I know I can always count on them.

Who is your favorite artist?

I actually listen to a pretty large variety of music, so I end up with only one or two songs from a single artist. I would have to pin Weird Al Yankovic as a personal favorite.

What is your favorite color?