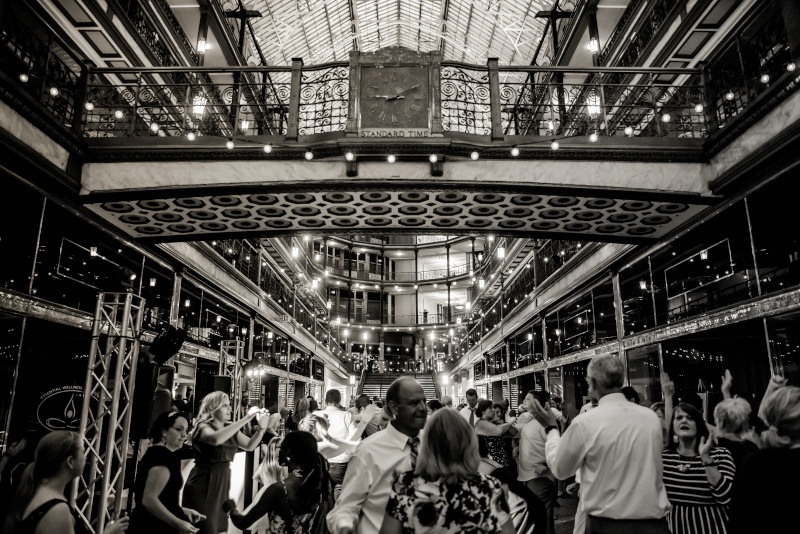 At Sound Precision Entertainment, we know there are certain crowd-pleasers that will get the majority of your guests out onto the dance floor. We’ve compiled our top 10 songs that will keep you groovin’ “All Night Long” (an honorable Lionel Ritchie mention).

An oldie but a goodie, Richard L. “Ric” Silver, a choreographer, pianist and Broadway performer, created the “Electric Slide” dance to the “Electric Boogie” in 1976. The moves are so simple that anyone can learn, but most of your guests should already know the steps!

Released in 1959, “Shout” was inducted to the Grammy Hall of Fame in 1999, and Rolling Stone magazine ranked it at number 118 on its list of “The 500 Greatest Songs of All Time.” Dancers young and old can’t resist putting their hands up to “Shout”!

Just this year, the Library of Congress selected “Y.M.C.A.” for preservation in the National Recording Registry for being “culturally, historically or aesthetically significant.” Originally released in 1978, even those who stay in their seats can’t resist the hand motions!

You don’t need to be from Alabama to appreciate this Southern rock hit. In fact, none of the three writers of the song were from the state! However, it’s a crowd-pleaser that everyone from your best friend to your distant cousin knows the words to.

Everybody’s family when this song comes on! But can you believe when Sister Sledge offered the song to Atlantic Records, the label originally declined? Thankfully, it was released as a single from the album of the same name in April 1979, eventually becoming the group’s signature song.

We all become small-town girls and city boys when we hear this song. And it’s enough to get even hesitant dancers to put down their drinks and hit the dance floor!

Everyone loves “Sweet Caroline”! This 1969 hit, inspired by John F. Kennedy’s daughter Caroline, is a sure crowd-pleaser. Good times never seemed so good!

A favorite of SPE DJ Karyn Adams, this upbeat tune hit the airways in 1978. And who doesn’t love to sing nonsense lyrics like “ba-dee-ya” (a point of contention within the band)?

Finish this lyric, “If you see a faded sign by the side of the road that says …” Yes, everyone can do it. The inspiration for the song is said to be “a cabin around Athens, Georgia” with a tin roof where the band conceived “Rock Lobster,” a single from its debut album.

We’ll round out our Top 10 list with a sweet song everyone can slow dance to that was written by the band’s bass player, John Deacon, about his wife. It’s also a great first dance or anniversary dance song!