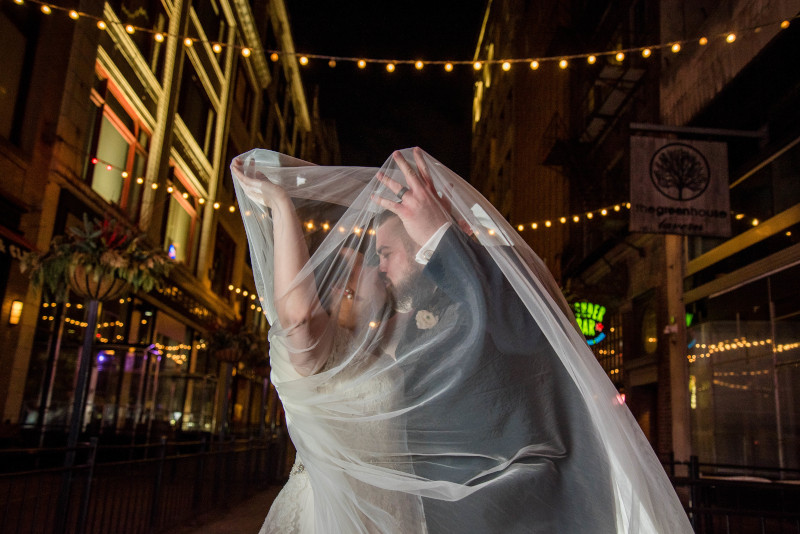 Wedding veils have evolved over the years (have you seen the floppy hat veils of the ‘80s?!), but 65% of brides still wear one, according to Wedding Ideas magazine. In fact, Wedding Historian Susan Waggoner has said the veil is “the oldest part of the bridal ensemble.”

Brides first wore veils to protect themselves from evil or jealous spirits, according to Southern Living magazine. Veils would confuse the devil and protect the bride-to-be.

Historically, the veil’s color was also significant – red was the color of defiance, while blue represented constancy and yellow represented Hymen, the god of marriage, according to “Bride’s Book of Etiquette” edited by Bride Magazine. Greek and Roman brides wore bright yellow veils representing fire to ward off demons or shades of red to shield themselves from malicious spirits. And early Christian brides wore white to symbolize purity or blue to signify Mary’s virginity.

In America, Martha Custis Washington (wife of George Washington)’s daughter, Nellie, is said to have started the tradition of wearing a white lace veil after her future fiancé caught a glimpse of her through a lace-curtained window, according to “Bride’s Book of Etiquette.”

However, in some cultures, veils were also used to hide a bride’s looks or identity during an arranged marriage to prevent a groom from backing out, according to Southern Living magazine.
Interested in the history behind other wedding traditions? Check out our blog on the symbolism behind wedding cakes, rings and garters.